MORGANTOWN, W.Va. (July 15, 2022) – The second half of the 50th Anniversary of the Lucas Oil Pro Motocross Championship, sanctioned by AMA Pro Racing, will get underway with the series’ annual visit to the “Land of 10,000 Lakes” in Minnesota for Round 7 of the 2022 season. Millville’s legendary Spring Creek MX Park will present one of the most dynamic track layouts on the schedule on Saturday, July 16, at the Frescados Tortillas Spring Creek National. Broadcast coverage of all four motos featuring the 250 Class and 450 Class will be showcased live on MAVTV Motorsports Network, with live streaming coverage on “MAVTV on FloRacing,” for which Pro Motocross fans can sign up for just $6.99 a month.

When it comes to navigating the challenges of Spring Creek, there’s no better person than two-time Pro Motocross 250 Class Champion and three-time Spring Creek National winner Jeremy Martin to lend his expertise. The Millville native, younger brother of veteran racer Alex Martin, and son of the track’s owners, John and Greta Martin, will bring that unparalleled insight into the broadcast booth on Saturday, where he’ll make his debut alongside host and lead commentator Jason Weigandt as All-Star Analyst. Although a heartbreaking shoulder injury ended Jeremy’s 2022 season before it even began and will prevent him from defending his Spring Creek victory from 2021, the newly signed Muc-Off/FXR/ClubMX Yamaha rider eagerly accepted the invitation to still be a part of his home race, albeit in a more unique capacity. In addition to his championship accolades (2014 & 2015), Martin’s 20 career wins place him in a tie for fourth on the all-time 250 Class wins list, while his 46 career podiums are the second most in the history of the division, just one shy of tying the all-time mark. 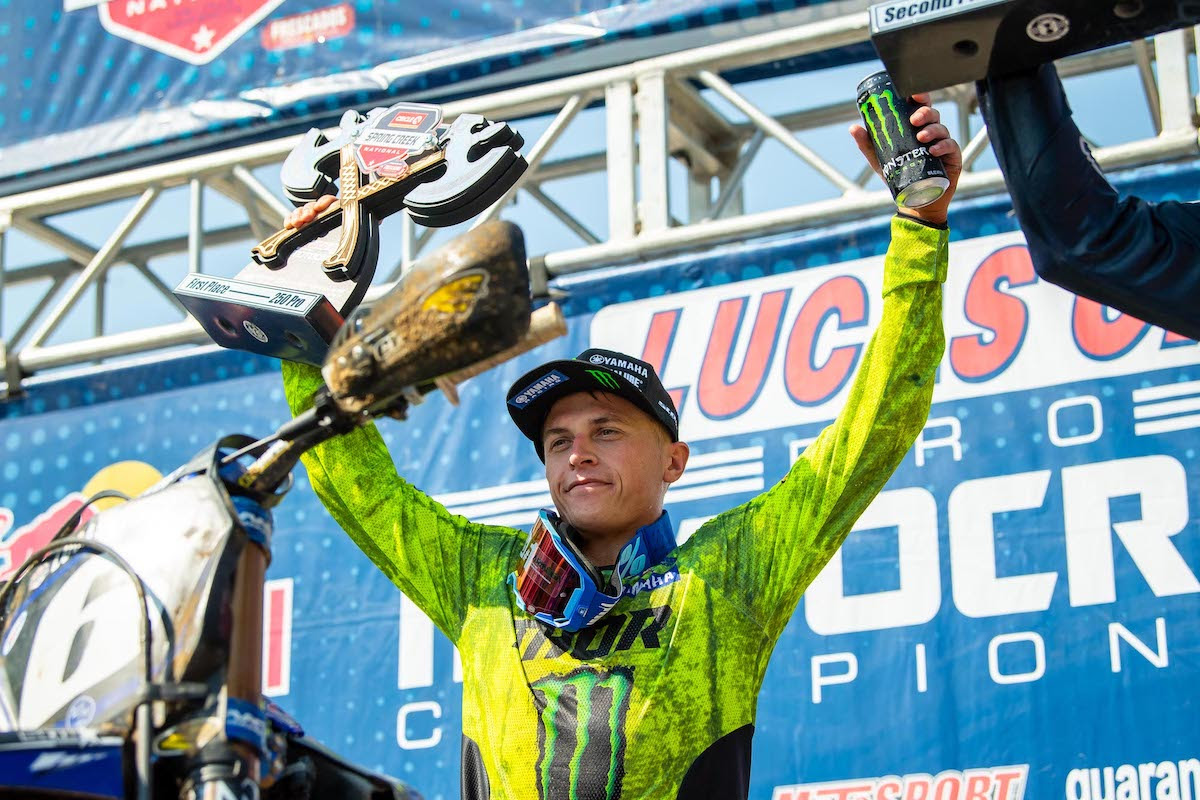 Jeremy Martin, last year's Spring Creek winner and Millville native, will make his debut in the broadcast booth as an All-Star Analyst for his home race. Photo: Align Media 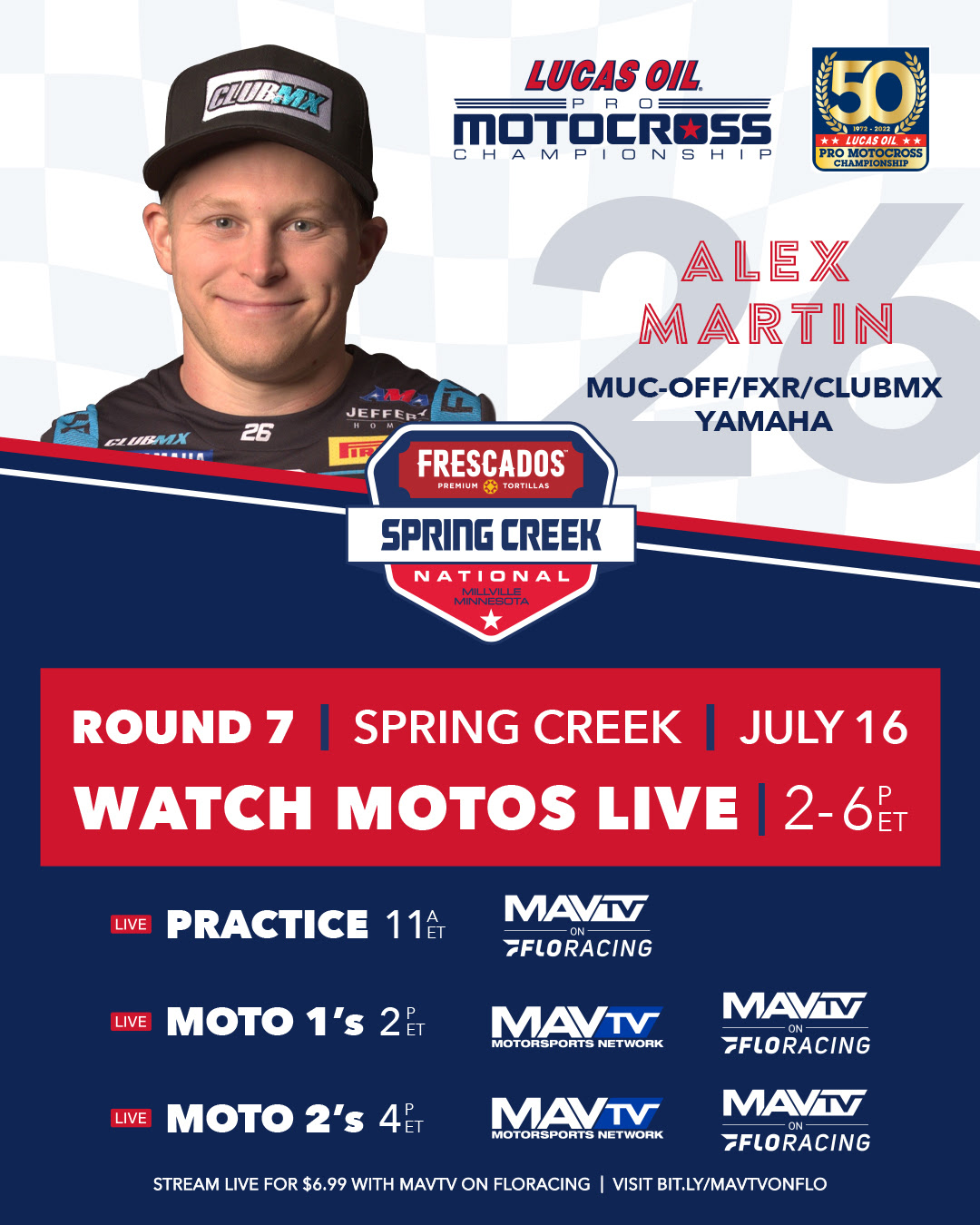 MAVTV MOTORSPORTS NETWORK U.S. BROADCASTS
Domestic television coverage from Spring Creek will feature live broadcasts of the pair of motos for both the 250 Class and 450 Class on MAVTV Motorsports Network.

"MAVTV ON FLORACING" STREAMING COVERAGE (DOMESTIC & INTERNATIONAL)
In addition to network coverage, fans in the U.S. and in countries around the world can stream all the action from Spring Creek online through their smart TV, streaming device, or mobile device by subscribing to “MAVTV on FloRacing,” which is available to Pro Motocross fans for $6.99 a month.

For information about the Lucas Oil Pro Motocross Championship, please visit ProMotocross.com and be sure to follow all of the Pro Motocross social media channels for exclusive content and additional information on the latest news:

Now available for download for both Apple and Android devices is the official Pro Motocross App. Fans of American motocross can have access to the world’s most prestigious off-road motorcycle racing series right at their fingertips on their mobile devices. Developed by AMA Pro Racing, the Pro Motocross App provides users with the most important information surrounding the Lucas Oil Pro Motocross Championship, from series news to schedule and ticket information, as well as broadcast schedule details and live timing & scoring. Download it now via the App Store or Google Play.

Lucas Oil Pro Motocross Championship
The Lucas Oil Pro Motocross Championship, sanctioned by AMA Pro Racing, features the world's fastest outdoor motocross racers, competing aboard homologated bikes from one of seven competing manufacturers on a collection of the roughest, toughest tracks on the planet. Racing takes place each Saturday afternoon, with competition divided into two classes: one for 250cc machines, and one for 450cc machines. MX Sports Pro Racing, the industry leader in off-road powersports event production, manages the Lucas Oil Pro Motocross Championship. The title sponsor is Lucas Oil, a leading producer of premium oils, greases, and problem-solving additives, all made in America. Broadcast coverage will be showcased live all season long on MAVTV Motorsports Network, with three rounds broadcast live on NBC Network.

More information can be found at www.ProMotocross.com.

Lucas Oil Products, Inc.
Lucas Oil Products was founded by Forrest and Charlotte Lucas with the simple philosophy of producing only the best line of lubricants and additives available anywhere. Since its inception, Lucas has steadfastly adhered to this corporate objective. Through innovative product research and development, along with aggressive marketing programs, Lucas has established itself as the top selling additive line in the United States. Additionally, Lucas Oil offers a premium line of motor oils, greases, fuel treatments, industrial lubricants, and problem-solving additives to help firmly establish Lucas Oil as a prominent figure in the marketplace. It has provided title sponsorship of the world’s prestigious off-road motorcycle racing series since the 2009 season.

MAVTV Motorsports Network
MAVTV Motorsports Network is the only television network in the U.S. dedicated exclusively to motorsports. MAVTV offers an unparalleled line-up of exclusive and unique events, including unprecedented live coverage of the 50th Anniversary of the Lucas Oil Pro Motocross Championship. MAVTV goes beyond the national mainstream motorsports events to include grassroots racing from across the globe: drag racing, sprint boats, rally cars, short course off-road truck racing, sprint cars, pro pulling, drifting, ice racing, cross-country motorcycle and ATV racing, ATV motocross, and everything in between. MAVTV knows you don’t have to be a race fan to be an automotive enthusiast, which is why we have developed a package of automotive reality and custom build shows that are truly second-to-none. MAVTV Motorsports Network is available on most cable, satellite, and digital television providers.

If it has a motor, it’s probably on MAVTV – The Motorsports Network!

FloSports
Founded in 2006, FloSports is a venture-backed subscription video streaming service dedicated to sports, offering live and on-demand access to hundreds of thousands of competition events across 25+ vertical sport categories in the US and abroad. With a growing library of more than 300,000 hours of premium content including news, expert commentary, films, documentaries and more, FloSports has established itself as an innovator and leader in sports streaming. Finally, your sport has a home.

Sign up now for “MAVTV on FloRacing” and receive an exclusive, limited-time offer of $6.99 a month.